The United Way ALICE Project provides a framework, language, and tools to measure and understand the struggles of the growing number of households in our communities that do not earn enough to afford basic necessities, a population called ALICE. This research initiative partners with state United Way organizations to present data that can stimulate meaningful discussion, attract new partners, and ultimately inform strategies that effect positive change.

Based on the overwhelming success of this research in identifying and articulating the needs of this vulnerable population, the United Way ALICE Project has grown from a pilot in Morris County, New Jersey in 2009, to the entire state of New Jersey in 2012, and now to the national level with 15 states participating.

Ohio United Ways are proud to join the some 450 United Ways from these states to better understand the struggles of ALICE. Organizations across the country are also using this data to better understand the struggles and needs of their employees, customers, and communities. The result is that ALICE is rapidly becoming part of the common vernacular, appearing in the media and in public forums discussing financial hardship in communities across the country.

Together, United Ways, government agencies, nonprofits, and corporations have the opportunity to evaluate current initiatives and discover innovative approaches that give ALICE a voice, and create changes that improve life for ALICE and the wider community.

ALICE, an acronym which stands for Asset Limited, Income Constrained, Employed, is a way of defining our families, neighbors and colleagues who work hard but struggle to afford a basic household budget. ALICE is a household with income above the federal poverty level but below a basic survival threshold, defined here as the ALICE Threshold. Defying many stereotypes, ALICE households are working households, composed of women and men, young and old, of all races and ethnicities, and they live in every county in Ohio – urban, suburban, and rural.

ALICE households, combined with those living in poverty, equals the total population struggling to afford basic needs; for Butler county, that number is 37% of the population.

You may read more about ALICE in Butler County, Ohio below; to view the 2020 report on ALICE in Ohio, CLICK HERE. 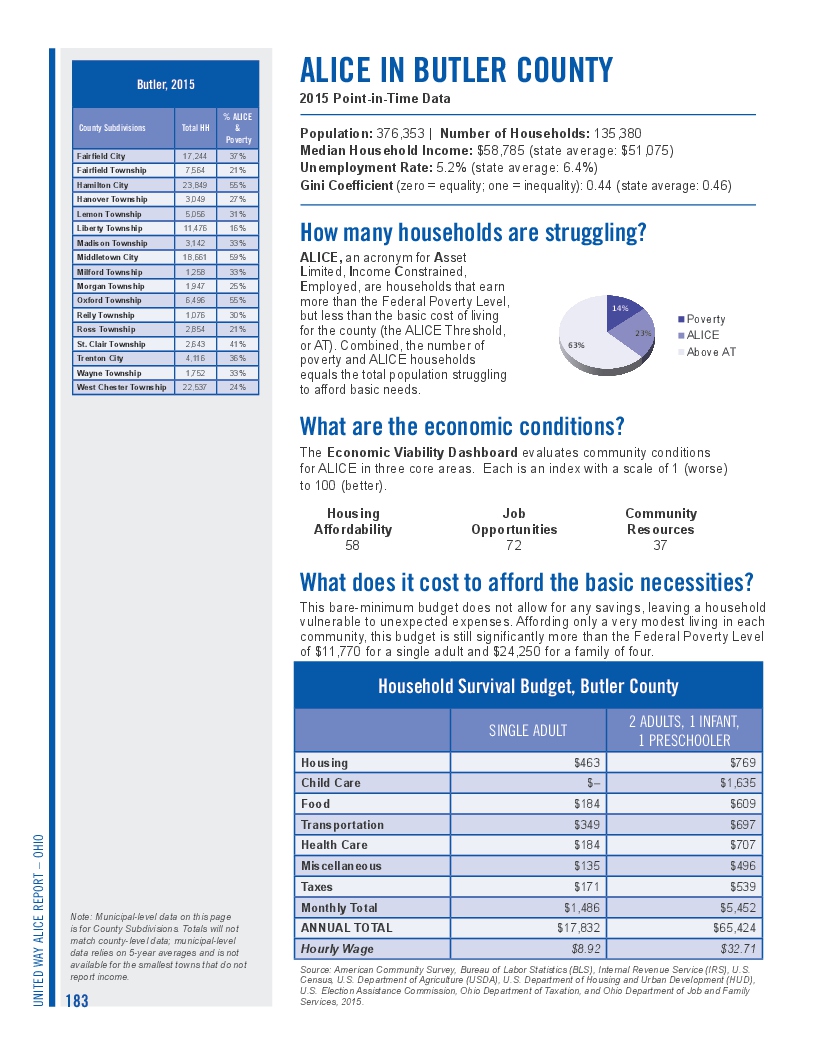 Please visit our volunteer
portal for more information
regarding all available
volunteer opportunities.